A Meaningful Report from Independent Experts? 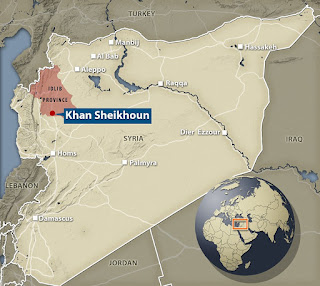 On September 6, the latest report of the United Nations Independent Commission of Inquiry on the Syrian Arab Republic (hereafter CoI) was released for public review. [1] First circulated on August 8, the report focuses on many incidents in Syria over the reporting period (March 1 to July 7). But all the news reports place emphasis on the findings of clear government guilt for Khan Sheikhoun sarin attack that killed nearly 100 civilians on April 4. It was herald as a solid, if not surprising, report by informed and unbiased experts. [2] But the reality of the “independent” label on this commission is highly questionable.

The CoI was a three-member panel until the frequent dissenter, Carla Del Ponte, resigned prior to news stories of August 6, two days before this report was first circulated. [3] A former Attorney-General in Switzerland, Del Ponte is known to accuse Western-backed forces of grave crimes (organ harvesting of captured Serbs by Kosovar forces in the former Yugoslavia, [4] and more relevant here, chemical weapons use by opposition forces in Syria. [5] ) Her statements suggest Del Ponte endorses the commission’s current direction, but that’s the public face.

Besides Brazilian legal scholar Paulo Pinheiro, the other remaining member is American Karen Koning-AbuZayd. She’s a Washington insider, a director of the Middle East Policy Council. [6] The MEPC is one of the many think tanks that hatches strategies to further U.S. interests in the area, and is clearly favorable to the opposition side.

Regardless of potential bias, such professionals might produce quality work assembled from solid evidence. If so, it should appear in this report. But upon review, this looks more like a sloppy exercise in subjective re-assembly of cherry-picked evidence to justify a preconceived position. In fact, its coverage of the incident is particularly and conspicuously flawed. It should be noted the report has no cited authors. This is unusual, and could suggest a lack of confidence or consensus.

The Commission says it asked for input from the Syrian government and got no response in time. As it is, the report cites alleged witness accounts almost entirely, but also selectively cites the opposition-supplied video evidence. And, as we’ll see, it ignores important evidence that undermines the claims they chose to accept.

Why Syria is to Blame: The Short Version


The CoI cites alleged witness accounts of a Sukhoi 22 (Su-22) attack jet carrying out the attack, and notes how it’s a distinct and easy to recognize craft. It’s just as easy to make up, but they’re sure it was really seen, and seen in the act of bombing the town. From there, the blame is just this easy to set:

“The Russian Federation and the international coalition do not operate this type of aircraft. It is therefore concluded that the Syrian air force carried out airstrikes on Khan Shaykhun at around 6.45 a.m. on 4 April”

This is their central point; for some reason it’s now certain that jet existed and conducted the sarin strike, and only Syria has those jets. They go into some details that are supposed to support that, but upon analysis, they pointedly fail to do so. For the reasons highlighted in the rest of this long article, this central claim fails.

The Reality of the Attack Jet(s)

The July OPCW report includes two witness accounts differing from the otherwise-accepted narrative. In these versions, a chemical warehouse was damaged, releasing toxins, but there were no jets. Both agreed in claiming, as the OPCW report put is: “there were no air raid warning put out until around 11:00 to 11:30 and no aircraft were observed until that time.” [7]

The claim was sidelined by the OPCW, and the CoI found it not credible. While it remains worthy of consideration, the claim could in fact be wrong somehow, and doesn’t constitute proof there really were no jets. Consider:

Story continued at The Indicter