Just realized this is my 1st blog post of 2018. Thought I had posted at least once this year. Ah well, lots happening in the world, especially the middle east. At least we can be thankful that POTUS Trump hasn't nuked another country - yet!

Damascus Countryside, SANA- Hundreds of civilians who had been besieged by the terrorist organizations in Ghouta to use them as human shields on Tuesday managed to exit through the safe corridors established by the Syrian Arab Army. 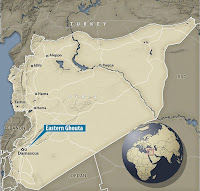 SANA correspondent to Eastern Ghouta said that around 400 civilians have exited Harasta area today via the corridor set up by the army on Saturday near the Water Resources building on the highway, adding that the army received the civilians upon arrival at the corridor and provided them with aid then transported them to temporary housing centers in Damascus Countryside.
The correspondent added that hundreds of civilians, mostly women and children along with elderly and sick people, exited via the Hammouriye corridor, and that the army and the Syrian Arab Red Crescent received them and provided them with food and water prior to transporting them to housing centers.