No Trace of Chemical Munition Attack in Douma - Russian MoD 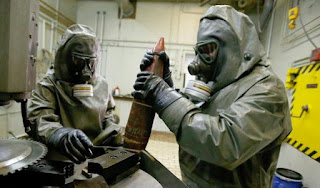 BEIRUT, LEBANON (8:45 P.M.) – The Russian military has found no evidence that chemical weapons were used by any party in the east Damascus district city of Douma according the Russian Ministry of Defence.

A statement by the Russian MoD claims that the reported site of the alleged chemical attack in Douma was assessed by military specialists and that no trace of any chemical weapons usage was found.

The Russian MoD added that photos released by the White Helmets (a self-declared civil rescue organization only found in
areas of Syria held by jihadist militants) depicting victims of the alleged chemical attack were ‘fake.’

On Saturday afternoon, Islamist rebels in Douma accused Syrian government forces of attacking the city’s residents with
chemical weapons; the claim has since gained traction in the Western world with the US and French heads of state now
threatening a possible counter-strike in response to the supposed attack.