Destroying Yemen as Humanely as Possible 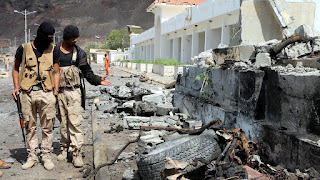 What a relief to learn that even though Saudi Arabia and the United Arab Emirates are bombing the crap out of Yemen, they are doing so humanely.  On September 12, US Secretary of State Mike Pompeo, pursuant to the John S. McCain National Defense Authorization Act for Fiscal Year 2019 (“NDAA”), certified that Saudi Arabia and the UAE are “undertaking demonstrable actions to reduce the risk of harm to civilians and civilian infrastructure” in their war on Houthi rebels in Yemen.
This was demonstrable horseshit.  The UN Office of the High Commissioner for Human Rights released a report on Yemen at the end of August.  Kamel Jendoubi, chairperson of the Group of International and Regional Eminent Experts on Yemen which authored the report, stated: “There is little evidence of any attempt by parties to the conflict to minimize civilian casualties.”  This puts the lie to Secretary of Defense James Mattis’ claim that the US military presence in Yemen helps to restrain the Saudis. More